Although the Aquarium Station and Car Sheds were demolished in November 2016, you will probably be aware by now that there seems to have been little progress with construction!

The reason is quite simple……it has taken much longer than expected to locate and disconnect the utility services at both sites.  During demolition of the Car Sheds, an unknown but live gas supply was found. It was inside a very old pipe in what was once the Traffic Superintendents office and was probably capped off but not disconnected several generations ago.  The source was finally located last week at a gas valve in Madeira Drive.  There is still an elusive electrical cable to locate and isolate on the north side of the site but it is hoped this will be dealt with very soon.

With the supplies now off at the Aquarium Station site, the contractors will shortly be demolishing the lower part of the station (the undercroft) and removing the steps to the side.  When this is done the new construction works will begin.

The delays are not all bad news as we have now found a window of opportunity to completely replace the eastern passing loop and all of the old concrete sleepers, which date from 1946.  When this work is finished the track throughout the route will be in very fine condition and should not need major attention for at least 5 years.  VERA’s track gang has been working alongside staff members for the past month to clear the loop so that new foundation materials and ballast can be delivered.  It is hoped that the new loop will be completed in April 2017.

Meanwhile the restoration of Cars 4, 6 and 10 is progressing well at the works of Alan Keef Ltd, near Ross-on-Wye.  Cars 4 and 6 have their new underframes and many of the original structural components have been renovated and placed in position.  It has always been the intention to recover and re-use as many of the original parts as possible so that they are restorations and not ‘replicas’.


Further updates will be posted here as the work gathers pace. 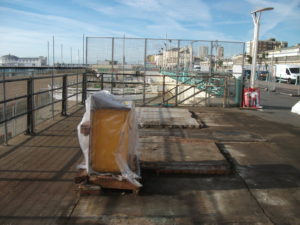 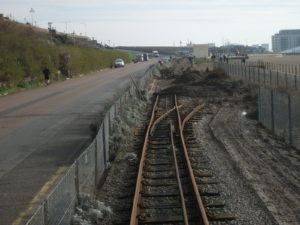 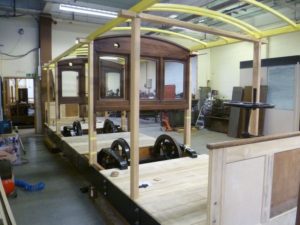 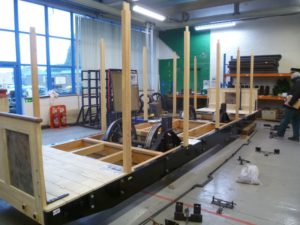