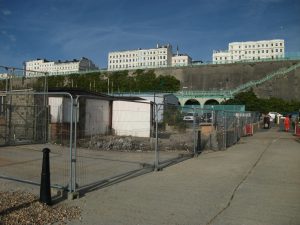 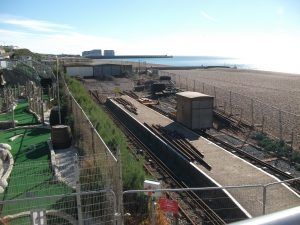 The appointed construction contractor, Messrs Cheesmur of Lewes, took possession of the Volk’s Electric Railway site on Monday 24th October.  The two sites, Aquarium Station and Car Sheds,  had previously been cleared of track and railway items by Volk’s staff and VERA volunteers and made ready to be formally ‘handed over’ to Cheesmur.  The contractor’s office and welfare facilities have been set up in the sand pit to the east of Banjo Groyne and Heras fencing had been erected by Wednesday 26th.  Work started the next day on removing the scaffolding that had held up the car shed roof for over 15 years!  A difficult job that required the use of cutting equipment as many of the bolts had rusted solid.

During November, the two sites will be raised to the ground and all foundations will be dug out.  Although it is sad to see the old buildings go, particularly the remains of Magnus Volk’s station on the north side of the car sheds, they had reached the point of ‘no return’ and were in imminent danger of collapse.  As part of the Heritage Lottery funding new buildings will be erected and these should serve the railway for a least another 50 years (perhaps even to the railway’s 200th anniversary?).

The photographs show the sheds cleared of track and the start of the works by Cheesmur.  Regular updates will be posted. 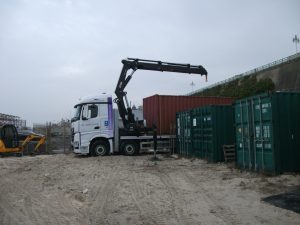 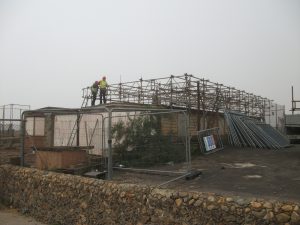