Tuesday, 24th May 2016 was an historic day for Car no. 4 as it began its journey to Ross-on-Wye to be fully restored by Alan Keef Ltd as part of the Heritage Lottery project.  Service was suspended on the railway at 12.30pm to allow the car to be pushed to a loading point just east of Banjo Groyne.  Within 30 minutes, Car 4 had been successfully lifted from the track on to a low-loader and after being carefully enshrouded in a net, it set off just after 1.15pm.

A further two cars are going away, Car no. 6 and Car no.10, in early-June and all will be carefully restored using as much of the original timber and fittings as possible.  Each car will require a new underframe to be constructed from Douglas Fir as all of them currently have extensive rot and distortion in this vital area.

The restoration will take 10 -12 months and all three cars should be back in Brighton by March -May 2017.

The photographs show car 4 in the shed just before being towed out, being pushed into position and then delicately lifted on to the low-loader. 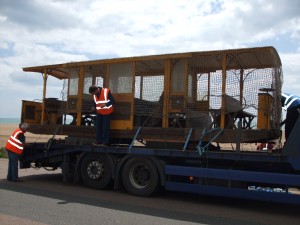 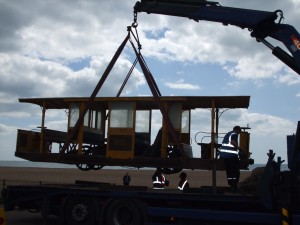 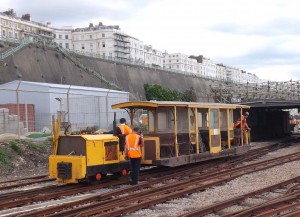 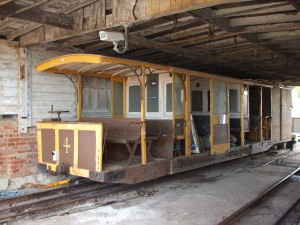