The railway’s 133rd season was opened by journalist and television broadcaster Nicholas (Nick) Owen on Good Friday, 25th March 2016.  Standing in bright Spring sunshine, Nick praised the efforts of the dedicated staff and volunteers in ensuring that the railway continues to operate. He said that this year will be the last opportunity to see the old Aquarium station and workshop at Halfway before the Heritage Lottery work starts in earnest in September 2016.

Nick Owen is a member of VE 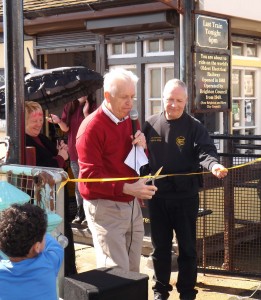 RA and a volunteer driver on the railway.  At 12 noon, Nick cut a ribbon to formally start the 2016 service which will run until Sunday 4th September.