The recently-announced Heritage Lottery Fund award for the construction of a new storage and maintenance shed means that the railway’s dedicated staff can finally look forward to better working conditions.

Stuart Strong, Manager of Volk’s Electric Railway since 1993 said “The shed has been supported by scaffolding for over half of the 21 years I have been the Manager of the railway and you can understand my excitement at the prospect of a new building with modern lighting and heating, proper inspection pits and roller shutter doors!   To be fair, the existing shed is now almost 130 years old and has served the railway well but it is tired and needs to be replaced.  My staff have endured great difficulties in recent times in keeping the cars operational in such a cold and damp environment.  In a very short time, all that will change”. 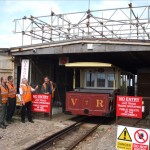 Stuart has been assisted for 16 years by Barry Fuller, the Deputy Manager, who said “I shall not be sorry to see the old building pulled down.  For too long Stuart and I have worked in cold and wet conditions to change motors, wheels and other parts, with limited space and facilities.  The new sheds will be larger and will enable us to look after a larger operational fleet of cars”. 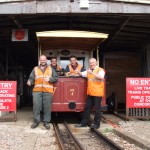 Two more recent members of staff, Maurice Curran, Senior Engineer and Simon Klimek, Seasonal Technician, share the same views but as Maurice noted “Magnus Volk could not have imagined that his former station and shed would last for this amount of time.  He would, I’m sure, be proud of the efforts we are making to preserve his legacy”.

Work will start on the new sheds at the end of the 2015 season.  In the meantime, the old building will be comprehensively photographed and filmed to form an historic record.

Thumbs up to the HLF, from left to right, Maurice Curran, Simon Klimek, Barry Fuller and Stuart Strong.