This station is still the most interesting as the car sheds are just off the end of the platform. The green line shows the limit of the 1884 line whilst the light orange line shows the 1901 extension. During its life the station has been known as Paston Place, Halfway and (Peter Pan’s) Playground. 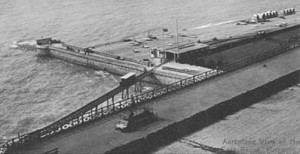 When the 1884 railway was laid down there appears to have been very little thought give to a grand depot at any point on the line, but by the time the railway was extended through to Black Rock, Paston Place had become a hive of industry with car sheds, workshops and offices.

The picture left shows an aerial view of the sheds, station and viaduct. The shed closest to the sea contained an office and storage for the cars, whilst the closer, north shed doubled as the station and storage for cars when running had finished for the day. 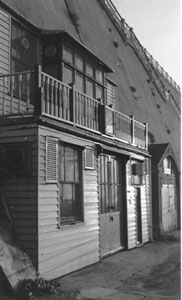 Across the road from the station are ‘The Arch’ and ‘The Cave’ in which Magnus set up his offices and workshops. There is written evidence that for some years rails ran across the road to the sheds so that cars could be moved into the workshop – which was situated in ‘The Cave’, the smaller of the two buildings. The reason for the buildings is a lot simpler that some may assume. The larger was constructed as a pumping station to send sea water up to the local hospital as bathing in it was deemed good for recovery. It was never a success so found use as a home for local boatmen before Magnus took out a lease on it and converted it into an office and workshop. The smaller building was used as a generating station for the ill-fated Daddy Long-legs before becoming a workshop and store. The view from Magnus’s office balcony is splendid and he could often be seen there keeping his eyes on drivers as they negotiated the viaduct!

When the railway was first extended to Black Rock the Corporation would not allow cars to traverse the Banjo Groyne as it was thought they would be a danger to walkers. So the line was operated as two separate sections with a second station on the edge of the viaduct. This situation did not last long. 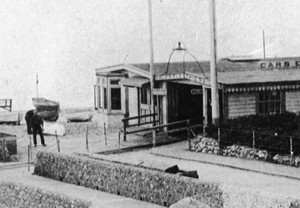 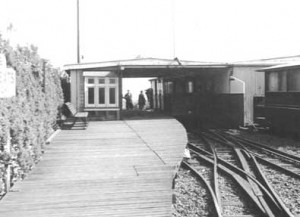 To give shelter to intending passengers the main platform at Paston Place was located inside the car shed. The picture on the left shows the two sheds from the viaduct end with the foot crossing very much in evidence. The farthest (south) shed with the bay window was fitted with three storage roads whilst the closer (north) shed with the open end had one through line with platform and a short storage siding made accessible by hinging the platform back against the wall.

The picture on the right was taken from the other end of the shed and clearly shows the hingeable platform with the siding diving under it. In the gloom you can just make out a car standing at the platform. Whilst this idea might have been good when the station was a terminus the platform arrangement must have been a bit tricky when cars passed here. As can be seen in the left picture access for passengers to and from the platform was at the Banjo Groyne end – I can’t help but think that the return to something like this would be preferable to the bleak platform currently provided. 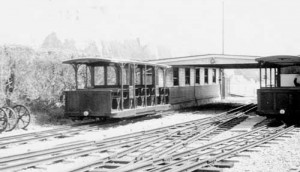 In the left hand picture an east-bound car is just leaving the hingeable platform en-route for Black Rock, passing as it does one of the original cars from 1884. The station sign shows the station as Paston Place and advises passengers to keep their seats for Black Rock. No doubt the sight of the car shed prompted many passengers that this was the end of the line! By the time this photograph was taken the world had experienced the ravages of war, and it was a time of change for Volk’s Electric Railway.

The new owners had rearranged the station by building a new platform to the west of the car sheds thus leaving the old hinged platform redundant. With it removed a permanent siding, capable of holding two cars, was installed in its place, although the mainline still follows the profile of the now removed platform. Car 9 stands on the new siding while Car 10 stands on the north road of the south shed. The wheelsets lying by the side of the track most probably came from one of the cars that failed to survive the period of wartime storage. 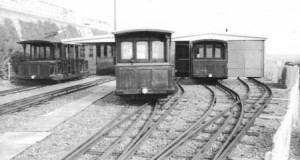 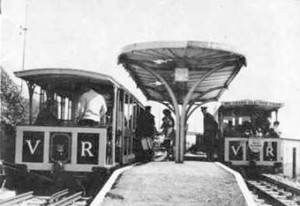 As can be seen in the picture to the left another change of layout leads to the car sheds being able to store 10 cars and leave room for offices and a mess room! This was achieved by realigning the mainline to a more central position through the north shed and using the point recovered from the old platform siding to provide another siding on the seaside of the mainline. The centre car in the upper picture is standing on the the new siding.

The Corporation built a replacement station about 100 yards west of the car sheds. It consisted of an island platform accessed by a foot crossing. As the crossing spans both lines, passengers can access the platform from either the beach or Madeira Drive.
The rather attractive canopy was constructed from metal and as can be imagined it suffered badly from the effects of salt air corrosion. In the early 1980s it had reached a critical state and the decision was taken to cut it down before it fell down. Unfortunately it was not replaced and passengers now have to brave the elements while waiting for the next car. 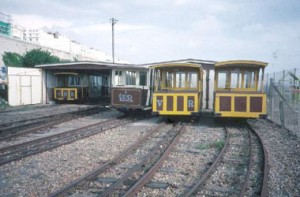 The current layout of the car sheds retains the three road south shed providing accommodation for 6 cars. A large pit has been provided under the centre road inside the shed.

Since doing away with the uniform varnished wood finish the cars have gone through a variety of liveries, mainly based on yellow, brown and ivory. In this picture from 1994 the various shades of livery are matched by a variety of lettering on the dashes – not least on the ex-Southend car which had a very florid style! 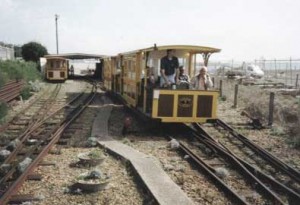 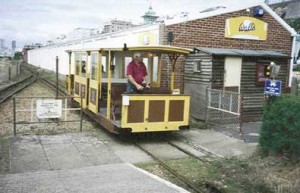 Two views showing the approaches to the station from both directions. To the left Car 5 heads a two car set into the platform from Black Rock. Having braked for the Banjo Groyne the driver coasts across the crossing and into the car shed. An application of just enough power to get from the shed to the platform will be kind on the brakes and on the passengers. At least the driver no longer has to reach above his head for the controller!

Entering Halfway from the Palace Pier end of the line cars have to cross the pedestrian access to the island platform. An automatic warning system triggers both audible and visual warning signs of the approach of a train but it has been known for people to still make a dash for the platform, so drivers have to be ever vigilant. The small wooden hut is the ticket office – a far cry from the days when Magnus had a proper waiting room constructed in ‘The Arch’.

During the winter of 2005/6 the Council arranged to divert the line to the west of Half Way to accommodate a new Beach Volleyball facility. VERA member John Goddard recorded the construction of this ‘deviation’ and his photographs can be seen by clicking here. 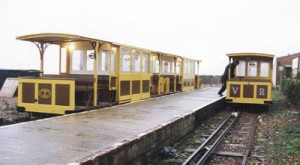 The bleakness of the station during bad weather is all too evident here as cars wait to enter service during a special VERA operating day on the occasion of the annual Veteran Car Run. A lot of the revenue from these special Association organised days goes towards the restoration fund. These special events are great fun for those members able to take part and also provide a good service for visitors.

Fortunately weather like this is an exception rather than a rule during the normal operating season. 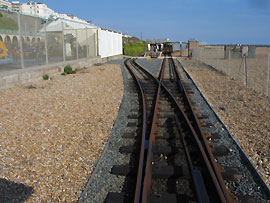 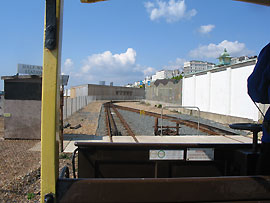 In the driving seat

These two pictures give our final glimpse of ‘Halfway’ and show a drivers eye view of the new formation caused by the deviation work. In the left hand picture the original formation was alongside the wall on the left with the loop coming out to the seaward side of the platform – now it is reversed.

In the other picture the view is seen towards Aquarium – the buildings in the distance are the facilities for the beach volley ball court.