Probably the most photographed and most spectacular part of Volk’s Electric Railway was
the steel viaduct which, from 1901, carried the railway off the Banjo Groyne and
over the beach to Madeira Drive. 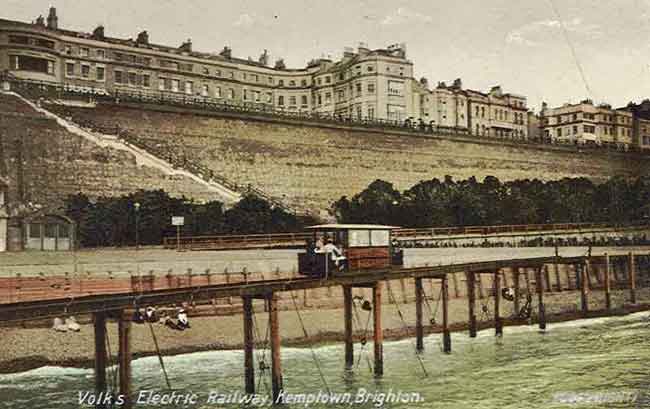 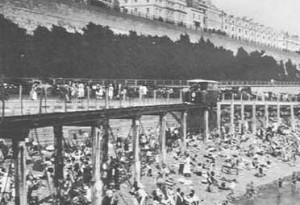 Over the years the action of the tides against the groyne and the general shift of shingle down the English Channel has seen the beach level getting higher. During the war, when beach management meant putting up barbed wire and planting mines, the shingle finally reached the underside of the track and the viaduct all but disappeared from view. Now only those who knew it was there would realise that such a structure existed. 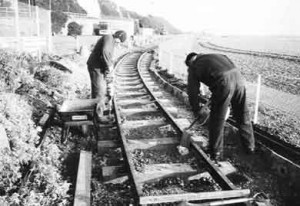 Pictured right Engineers renewing track on the curve where the line curved off the viaduct and on towards Black Rock.
The picture below and to the left shows the site of the viaduct before the track was recently relaid. As can be seen the shingle has built right up to the level of Madeira Drive and a triangular concrete infill has been placed to the north of the line. Even in 2014, if you look closely, you will see the rusting remains of the top of the viaduct structure on either side of the track. 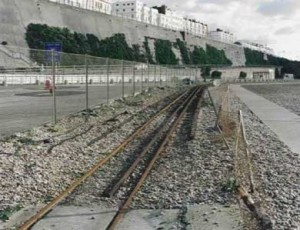 Above an empty stock working from Black Rock bound for the car sheds crosses Banjo Groyne with the rear car still on the old viaduct location. This picture was taken from Magnus’s office verandah in the Arch late one evening after a VERA extended running day.