The eastern most end of the line. The large dot marks the position of the original station of 1901. In 1936/7 curtailment of the line took place enabling the Corporation to build the Lido on the original site. The new station is marked by the smaller spot. When the 1990s drainage project absorbed this station site the line was shortened by about another 100yards (the green spot). 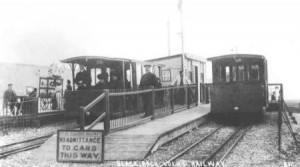 The electric cars of Volk’s Railway finally reached the rocky outcrop at Black Rock in 1901. The first station, like Palace Pier, was compact and provided with two platform faces. There was also a ticket office and waiting room – on the wall of the waiting room a sign notes that the first car from the station is at 9.00am each morning. The last car departs for Palace Pier at 7.00pm. To the left in this picture some entertainment is being provided by the chap sitting at a small table fitted with an early wax-cylinder gamaphone – or perhaps it is a novelty voice recorder! The wagon alongside him contains a collection on birds in a mobile aviary. 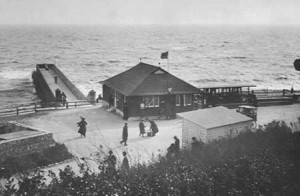 On April 5th 1911, a new ‘bungalow’ design station building was opened, an event that coincided with Oscar Morison landing his Bleriot monoplane on the sand near the Banjo Groyne – the first time that an aeroplane was seen in Brighton. The station retained the two platform faces of the original design but the new building was a great improvement.

In 1925 Magnus pre-empted the era of integrated transport by starting a venture called Downland Cars. Two Guy chassis were acquired and Magnus’s son Herman designed two single deck coach bodies to fit on them. For a while these little buses ran a service between Black Rock Station and the Downs to give passengers the chance to explore the countryside. The service was never a great success and was withdrawn when maintenance costs and lack of passengers made it uneconomic. 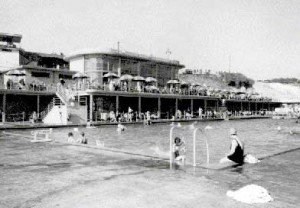 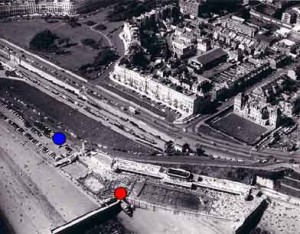 In 1937 the Corporation opened their new swimming pool at Black Rock. This construction of this pool had been the original reason for cutting back the line at the pier end as the pool was originally going to be built opposite the Aquarium. This never happened so now Magnus was forced to cut back his line again – this time at the other end – to accommodate this new facility. The red dot on the aerial photograph shows the site of the original – which more or less coincides with the shallow end – while the blue dot shows the site of the curtailed 1937 terminus.

The new station was considerably more modern in design than the bungalow and matched in many ways the 1930’s modern style adopted by the swimming pool. As can be expected the pool bought more business to the Railway but the Corporation demanded their pound of flesh and increased Magnus’s rent in relation to the extra business. But neither the bathers at the new pool or the passengers on Volk’s Railway had long to enjoy this new experience. In September 1939 Britain declared war on Germany. The pool closed almost immediately while the Railway carried on until 1940 when it closed for the duration. Like the Aquarium the new station at Black Rock was torn down as it presented an obstacle to the defence of the beaches and by the time the war was over Black Rock was in a sorry state. 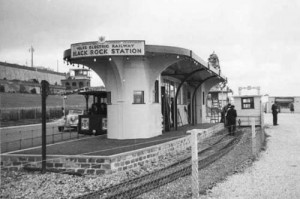 In 1948 the Corporation, as new owners of the line, reopened the railway through from Aquarium to Black Rock and built a new station similar in style to Magnus Volk’s 1937 building. The station was very conveniently situated for Black Rock Lido, being no more than a hundred yards from the main entrance. The land on the seaward side of the station became a car park for the Lido and for those wishing to take the bracing sea air for which this part of Sussex is justly famed. This picture was taken by Dewi Williams on a visit to Brighton in 1953 and shows the station being dressed overall with coloured bulbs in celebration of the forthcoming Coronation of HM Queen Elizabeth II. 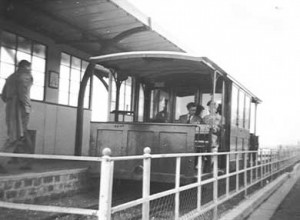 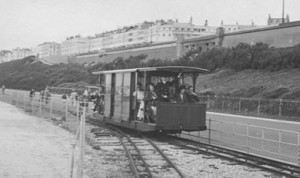 For most of its length from Halfway to Black Rock the line runs alongside the road with no physical barrier between train and car except a fairly flimsy fence. This can cause trouble, especially when a badly parked vehicle nudges the fence railwards! Fortunately the motorman seen passing over the south platform points on his approach to Black Rock has encountered no such problem. As the picture above right shows, the sun doesn’t always shine at Brighton and it looks a bit misty as a raincoat wearing passenger makes a dash for the train – perhaps he is trying to get a vacant front seat alongside the driver, or perhaps he wants a warmer berth in the enclosed centre saloon.

One evening in the early 1980s after an ill-advised rock concert adjacent to Black Rock the station was fire-bombed and badly damaged. Although the south siding was abandoned once two car operation started it was re- commissioned in the early 80s for use with schools charters and other special workings.

At the end of the 1980s the decision was taken to do away with the siding for good and the track was lifted. This left both terminal stations with just one platform face. Black Rock Lido had closed in the 1970s and was demolished in 1978. From then until now the part of the Lido not used for the access road to the Marina – which is the most of it – has lain derelict. Plans now exist to redevelop the area – hopefully with Volk’s Railway as a part of it. 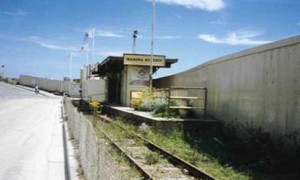 In the 1990s a new storm drain scheme was proposed for Brighton which entailed the construction of a deep level drainage tunnel running from Black Rock to Hove. In order for the construction work to progress Volk’s Railway was again curtailed, this time by about 100-150 yards. For a time this left the post-war station marooned on the edge of the building site and in the way of the proposed new pumping house. This picture shows the station, by then sporting the name Marina Station, derelict and awaiting demolition.

While the work was progressing a temporary Black Rock Station was constructed. This was a single platform affair with a small block built booking office, very much in the style of the original 1901 station. The level crossing in the foreground of the left hand picture was for the land train that ran into the Marina to turn round. Another crossing was provided at the other end of the station thus leaving the station in the middle of a roundabout! The gate was kept locked so no signaling was provided. 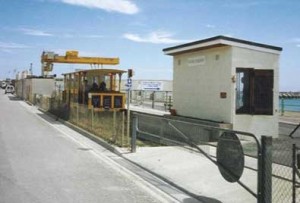 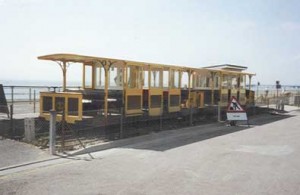 With completion of the drainage work a new station was constructed in part of the neo-classical pumping station. This again is a single platform station with a small ticket office – and toilets! There is a railing-guided queuing system and passengers must have alighted from the train before intending passengers are allowed on the platform. These three pictures give some idea of the station as it looked during winter 2003. The elements had taken their toll on the finish and it had obviously been a target for vandals. I must admit that it is not to my taste as far as a Volk’s building, or even a railway orientated building, goes. When I visited in February 2004 it certainly needed a bit of TLC. Hopefully if the line is extended back to its 1937 site then we might see a return to a building a bit more in the Volk’s art-deco style. 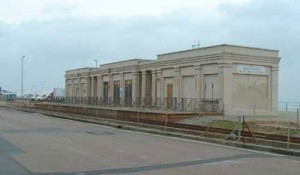 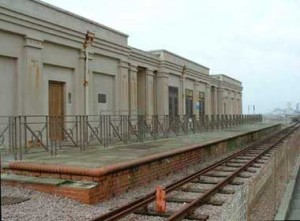 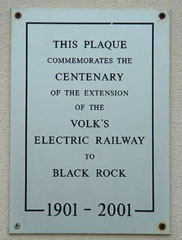 The end of the line

The plaque was erected on the station in 2001 by the Volk’s Electric Railway Association to commemorate 100 years of service to Black Rock. At the moment this is the end of the line. Progression into the Marina would involve major engineering works with steep gradients, roads and car parks to negotiate, but restoration back into the old Black Rock Lido site is not such a daunting possibility. The thought of getting the Railway back to its original 1901 terminal site is no longer beyond the bounds of possibility, but I fear that decision is not in the remit of the Railway as it is at the moment.