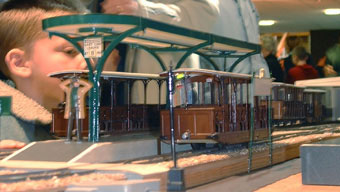 VERA Member John Goddard has built a really remarkable model of Volk’s as it would have appeared in the 1950s. The fully operating model is often to be seen on display at model railway exhibitions in the South of England, and it always draws a good crowd. These pictures were taken in far from ideal conditions at the 2004 Brighton Model World Exhibition.

Left: An out of scale young enthusiast watches intently as the miniature cars 10 and 3 pass at Playground.

Right: Open car 10 waits in the north siding at Aquarium – no doubt the driver is having a quick chat with the cashier!

Below: John’s attention to detail is not restricted to the Cars, as this view of Aquarium Station shows.

Below right: A full house at Aquarium with cars 4 & 9 occupying the platform roads.

Below left: This view of Paston Place Car Sheds clearly shows the second siding layout to be adopted after the war. It enabled all 10 cars to be accommodated under cover.

With four cars out on the line the remaining 6, including two from Southend, line up outside the sheds. The main line to Black Rock is the centre line through the the left hand (north) shed. 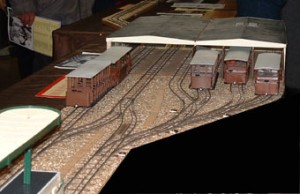 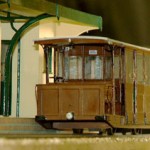 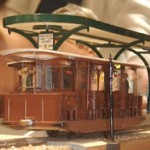 Above centre: Car 3 awaits its driver at Black Rock. The car is sited in the south siding. The site occupied by this station is now part of a car park – it would be nice to think that we can emulate the model and regain this site.

Above right: Final shot is of Playground – complete with canopy! 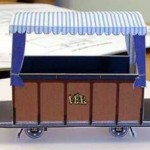