The story of the Oldest Working Electric Railway in the World 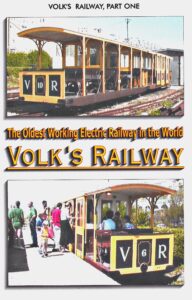 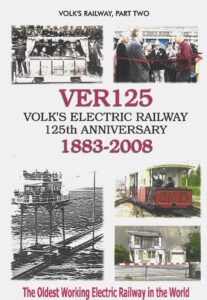 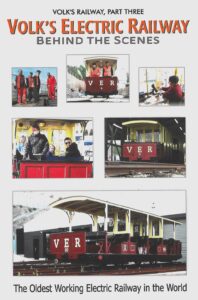 Volume 1 charts the history of the railway from its humble beginnings to the Centenery of this ground breaking line in 1983. The history of the railway is littered with disasters and opposition that would have caused a lesser man than Magnus Volk to turn his back on his creation and walk away. However he kept faith with the railway and it is still with us toady. Unfortunately the same cannot be said of the ‘Daddy Long Legs’, the ill fated and short-lived ‘off shore’ railway he built between Paston Place and Rottingdean. Both railways are chronicled in this fascinating DVD. (60 minutes)

Volume 2: Although tagged as a record of the 125th Anniversary Celebration of the railway in 2008 this DVD is much more than that. Historic footage of the railway in past years, courtesy of Screen Archive South East gives more insight in to the operation and history, while the recently discovered piece of film shot by George Albert Smith in 1897 shows the wonderfully eccentric ‘Daddy Long Legs’ making its way through the sea. This DVD makes a splendid companion piece to Volume 1. (50 minutes)

Volume 3: This DVD brings us up to date with the Heritage Lottery Grant of 2015, which will hopefully secure the future of this historic railway for many more years into the future. As well as some more historic material from the Winston Robinson collection held at Screen Archive South East the DVD takes us behind the scenes as the railway and its historic rail cars are restored. New sheds at Halfway and a new station at Aquarium add to the record – as do many of those working and volunteering to keep Magnus’s wonderful railway running. (65 minutes) 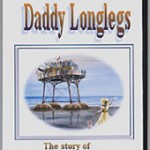 IN SEARCH OF DADDY LONGLEGS

Volk’s Railway was the first electric railway to be constructed in England. It’s quite a modest little railway but it was once part of a much grander scheme, for there was a time when Volk’s railway ran all the way along the coast to Rottingdean, and it was very unusual because the track, for the most part, was under the sea, and the carriage travelled above the surface of the water on long ‘stilt like’ legs. Much of the track has been obliterated by the building of the Marina but there are still remains to be seen a little further to the east. The track is only exposed at low tide and this must have posed quite a few problems for its construction. The time that you get to explore down here is quite limited so it must have been the same for the builders of the track. The trip would start from the Banjo Groyne at Kemp Town and then proceed to Rottingdean at not much more than a walking pace for which you would be charged the princely sum of sixpence each way.Magnus named his creation the ‘Pioneer’ (soon nicknamed Daddy Longlegs) and it proved to be a great success with his public. Sadly though, it only ran for a very few years, mainly due to the fact that it was operating in such a harsh environment, but its memory lives on. 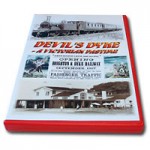 The Devil’s Dyke, a deep gorge in the South Downs five and a half miles north west of Brighton, began life as a tourist attraction as early as 1818 when a small wooden hut was erected on the adjacent Dyke Hill. In the 1830s a Mr. William Thacker built a hotel on the site, and in later years an adventurous proprietor named James Hubbard took over and increased the facilities to include a bicycle railway, roundabouts, swings, a brass band and all the fun of the fair. He also opened two unusual enterprises; an Aerial Cableway and a Funicular Railway. An essential part of a day out at the Devil’s Dyke was the ride on the Brighton and Dyke Railway. The standard gauge line enabled visitors easy access to the Dyke, and during the 1890s James Hubbard’s amusement park was one of the most important tourist attractions of South East England. 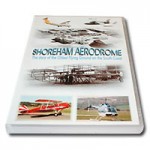 SHOREHAM AERODROME, known today as Shoreham Airport, was the birthplace of aeronautical heritage in the South East of England. There have been many a famous aviator flying to and from Shoreham’s grass, but this story tells about the less well known characters that have made Shoreham the well respected airport that it is today. Harold Piffard, the first person to fly a heavier-than-air powered flying machine over Sussex, created local public interest in flying, Cecil and Eric Pashley, the two brothers who put Shoreham on the aviation map, and Fred, George and Blossom Miles, the family that kept the airport operational during those lean years after the Second World War.