The formation of a supporters Association for the railway in 1995 provided a ready supply of volunteers willing to assist the small full time staff to keep the railway running into the new millenium. During the following years several schemes were suggested to improve the railway but in the end it was always money that proved the stumbling block. One scheme that was to prove very useful in future years was the decision to try out a variety of liveries on the car fleet. These consisted of dark brown and cream, and red and light cream. So for a time there was a chance to see three different liveries in operation. It certainly made for variety.

As well as providing practical help at the railway VERA was able to assist in promoting the railway via exhibitions and special events. Any money raised was placed in to a fund to finance special projects as and when they arose. One way the Association raised money was by operating occasional evening running sessions for the public after the normal service ended. In this way the amount VERA was able to accumulate would become very useful when it came to the time to restore the railway.

Heritage Lottery to the rescue

Leading up to 2015 the Council with assistance from VERA, put together a bid for Heritage lottery funding. So it was with relief that the ews from Lottery HQ was positive and the railway was awarded £1.65m. This would enable the replacement of the condemned works and running shed at Halfway, the provision of a new station and visitor centre at Aquarium, and the professional restoration of three of the car fleet – cars 4, 6 and 10. Work started in 2016 at the end of that season with the demolition of Aquarium Station and the car sheds. The cars remaining at the railway were placed in a temporary storage at Halfway. It was hoped that building work would be finished by Easter 2017, but as with most things Volk’s problems caused delays and the railway was unable to operate until the end of 2017, with a full service beginning in 2018. 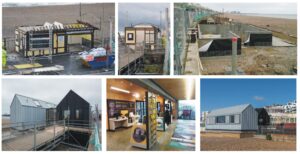 The replacement of the car sheds at Halfway was a very large undertaking in which the Association played a key role. A temporary storage shed was constructed on the old viaduct site in which to keep those cars still at the railway. Additionally VERA had paid for a smaller storage shed alongside the old car sheds to use for the restoration of Car 9 which had not been included in the Lottery Grant restoration. All remaining track between Banjo Groyne and the Halfway platform was lifted and contractors moved in to demolish the old car sheds. Once the ground was cleared and levelled the concrete bases of the new south and north sheds could be laid – the north shed was to also include an inspection pit. Unlike the old arrangement both the sheds would be self contained and the main line would run through a tunnel between them.  With the steel work erected the mainline was laid in place and work on cladding the new building commenced and the building could be fitted out. As well as a stock storage shed and a workshop/restoration shed there is a public viewing gallery with displays and interpretaion boards so visitors can see work being undertaken and learn more about the railway. 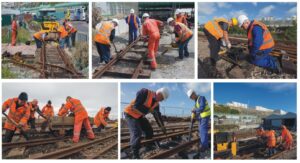 While building work was going on VERA members were working on the track and in the workshop. The East Loop was relaid with fresh ballast and new sleepers, and then there was the massive job of laying the new formation at Halfway to connect the new sheds to the mainline. How many tons of ballast were involved is not known, but VERA members shovelled and packed most of it. In the workshops VERA members refurbished point levers and refurbished or made countless new insulators to hold the third rail in place.

As well as the infrastructure that benefited from the Heritage Lottery Grant three of the cars, Numbers 4 , 6 and 10 were rebuilt by Alan Keef Ltd., and details of that can be seen on the Car Fleet pages. Further details of the work undertaken by VERA volunteers can be found on our Facebook page. Thanks very much to John Fox, Les Kenward and Tim Steven for the pictures of the renovations.

The Worlds Oldest Operating Electric Railway is now back up and running in a better state than it has been for many years. The Volk’s Electric Railway Association has now become a major stakeholder in the railway, so why not join us and help keep the work of Magnus Volk alive and well.

BACK TO HOME PAGE