With a stable international situation again established the Corporation set to and upgraded their new asset. The mainline was rebuilt using 50lb rail for the running line and 25lb mounted on insulators for the third rail. At Aquarium an old tram shelter replaced the rather flimsy pre-war shelter while at ‘Half Way’ a completely new island platform and passenger access was created about 50 yards west of the car sheds and old station. Even the car sheds were rebuilt to allow all cars to be kept undercover.

The pre-war Aquarium Station was destroyed during the war and a new building was required. Fortuntely the Transport Department had a redundant tram shelter and this proved ideal for a station building and was dismantled and re-erected at the western terminus.

At Black Rock a new station was built to replace the war damaged 1937 building. Most of the steelwork for the shelters at ‘Half Way’ and ‘Black Rock’ came from wartime defences and aircraft scrap. The ‘art-deco’ style of station was designed to blend in with the architectural style of the Lido at Black Rock. 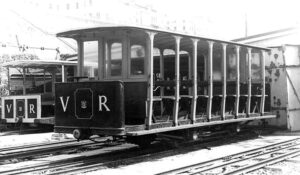 Damage to the car fleet

Wartime storage, much of it in the open, had taken its toll on the car fleet. Cars 1 and 2 from 1884 were deemed beyond econominc repair and were scrapped alongside the much younger Car 5, the metal body of which had suffered badly from corrosion. To fill the gaps two ex Southend Pier Railway trailer cars were purchased in 1949 and converted to motor cars. These became numbers 8 & 9 in the Corporation’s fleet and are seen in action right.

The railway reopened from wartime hibernation on the 15th May 1948. In 1952 the winter service was suspended to allow some track repairs but was reinstated after repairs were complete. The new, short-lived, winter service with drivers selling travel tickets was not a success and was not included in the timetable after the 1954 season.

1961 and a change of direction

In 1961 control of the railway passed from the Transport Department to Entertainments & Publicity who decided to alter its image. From 1962 cars started to appear in a new brown and yellow livery with VR and the Brighton crest applied to the sides. Unfortunately the fall in visitors due to the package tour boom coupled with closure of the Black Rock Lido in 1978 saw passenger numbers drop to an all time low.

The development of ‘Half Way’ in to ‘Peter Pans Playground’ partially restored the fortunes of the railway. Cars still ran individually but they were allowed to follow each other line of sight. Having two platform roads at Aquarium and Black Rock helped with the operation and also meant that one car was nearly always in the station providing valuable advertising for the service.

In 1964 the railway succesfully developed coupling two cars together as a train with controls duplicated at each end. This meant a two car train could cope with moving larger numbers of people and it halved the number of drivers required to operate the service. The 2 car operation eventually led to the removal of the second platform road at Aquarium and Black Rock. The brief respite from falling passenger numbers didn’t last, and with expenditure mounting the decision was taken to keep the railway running as far as the 1983 Centenary and then review the situation. 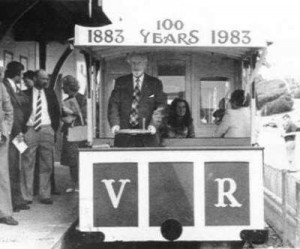 The 1983 Centenary was a great success with Magnus’s youngest son, Conrad driving the special train. Cars 3 & 4 carried special headboards commemorating the event and a souvenir booklet was produced. The railway had been tidied up for the celebrations and a lot of hard work had been put in to keep things running by Eric Masters who was the engineer at the time. Eric was responsible for bringing a lot of engineering knowledge to the railway and even experimented with both three and four car formations.

The success of the Centenary meant the railway was to survive, although money for new projects and renovations was still short.

In the 1990s a new storm drain project caused great disruption to the eastern end of the line. The 1948 station was torn down and the line foreshortened by another hundred yards or so to a temporary station. For a while this station was connected to the Marina by Dotto Train but the service was unreliable and was eventually dropped. On completion of the work the line was reinstated to the site of the old station where a new platform had been incorporated into the Regency styled pump house.