Extensions to Black Rock.
The railway passes to Council control

Following the failure of his Brighton & Rottingdean Seashore Electric Railway Magnus sought permission to extend Volk’s Electric Railway beyond the Banjo Groyne to Black Rock. Finally opened in September 1901 the extension bought the total length of the railway to 1¼ miles. 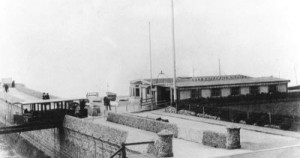 As can be seen the car shed now became a tunnel through which cars passed on their way to cross the groyne and head towards Black Rock. Because of the lack of shingle on the eastward side of the groyne a steel braced viaduct was constructed to take the railway over the beach and onto the less spectacular timber viaduct that carried it towards the level ground at Black Rock.

Pictured below left the viaduct seen from the Banjo Groyne. In rough weather waves would break over the cars and drivers wore oilskins. Below right shows the less spectacular timber viaduct. 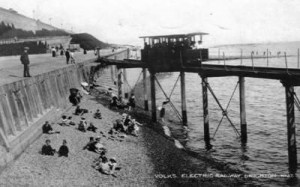 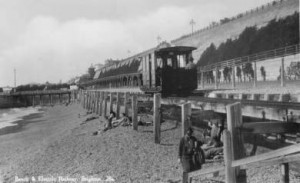 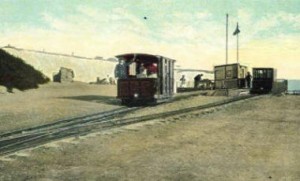 Black Rock Station was on an exposed outcrop with little to welcome passengers except the possibility of a walk along the ‘White Cliffs of Old England’ towards Rottingdean. This delightful postcard shows a car leaving for the return journey to Aquarium – or Palace Pier as it had now been renamed. The driver is reaching up for the speed control which was fitted on the underside of the roof.

With the increased power requirements of the newly extended railway the gas engine powered dynamo was replaced in favour of connection to the town’s mains electricity. A Parker rotary transformer was used to lower voltage to the 160 volts dc that was required by the system. It wasn’t only the power that needed upgrading – the longer line meant more miles per year per car so three new semi-opens joined the fleet in 1901 making a total of 8 cars in all. Over the next 25 years two more cars were added making a total of 10 to handle the million or so passengers the railway carried a year. 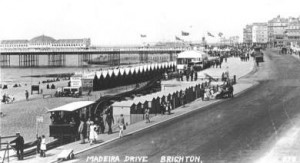 In 1930 redevelopment of Madeira Drive saw the line cut back at the western end to a site opposite the Aquarium. Not so conveniently placed for the pier as the original station the name reverted to Aquarium. 1930 also saw the introduction of a purpose built winter car – the last car built specifically for Volk’s Electric Railway.

And it wasn’t only at the west end of the line that things were changing. At Black Rock the Council decided to build a new swimming pool on the land currently occupied by the VER station. In order to accommodate the new development the eastern end of the railway was foreshortened by a few hundred yards. 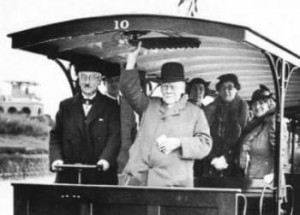 The new Black Rock station was opened on May 7th 1937 when the Deputy Mayor and Magnus Volk took joint control of Car 10 for a journey from the New Station. Magnus, by now 85, is shown reaching up to take control of the overhead rheostat while the Deputy Mayor grips the brake wheel. Unfortunately this was to be Magnus’s last public appearance as he died peacefully at home13 days later. With Magnus’s death control of the railway passed to his son Herman – but unlike his father, Herman’s tenure was to be short-lived.

The 1938 ‘Brighton Corporation (Transport) Act’ had far reaching powers – including taking Volk’s Railway into Corporation control. Initially they simply leased the line and operation back to Herman but on April 1st 1940 they took full control and the railway’s association with the Volk family ceased. It seems odd to think that the Corporation could concentrate on such matters when far more important events were unfolding on the world stage. The threat of invasion caused the closing and fortification of the beaches and the railway ran its last train in July 1940.