Following the scrapping of Cars 1, 2 and 5 in the immediate post-war years there was a hole in the fleet that needed plugging quickly and cheaply. It just so happened that Southend Corporation were replacing the rolling stock on their pier railway and a lot of trailer cars – from a similar era to the existing Volk’s fleet – were surplus to requirements. 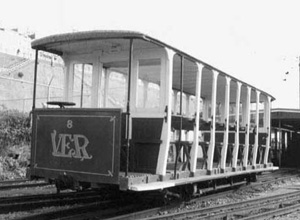 The Corporation purchased two 1899 cross-bench open control trailers. Built by the Falcon Works at Loughborough they had been rebuilt by Brush in 1911 with end bulkheads. Although fitted with a controller and brakes the cars had no motors so it was a little time before they entered service.

As the three numbers made spare by the scrapping had been filled by simply re-numbering three of the existing fleet the ‘new’ cars were given the numbers 8 & 9. Car 8 was fitted with two 140 volt motors – one for each direction of running – with belt drives to the axles. It entered service in 1950. Car 9 didn’t come into service until 1953 and was fitted with two 60 volt milk-float motors in series both capable of driving in either direction. The cars were certainly faster than the other stock but both had defects that would make them less forgiving than the Volk’s cars. 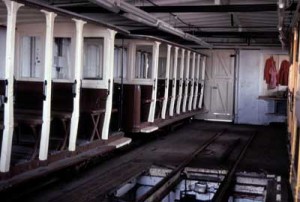 As can be guessed when two car operation came to the Railway the two ex-Southend cars were coupled together and ran as a dedicated set. Although Car 8 had proved little or no problem Car 9 suffered from brake problems caused by the brake system having no compensation between the front and rear brakes. This, added to a rather bouncy suspension and short wheelbase meant that in the event of heavy application of brakes the car would ‘dig in’ at the front end thus lifting the brake shoes off the rear set of wheels and halving the braking potential.

When coupled together the rear car’s brakes were worked on an over-run principle similar to that of a car and caravan, so the less efficient the braking of the front car the less over-run on the second. With negligible braking from the second car the set became almost impossible to stop. Car 9 was coupled at the east end of the set so stopping at Black Rock was a question of coasting for most of the journey from the last crossing into the station. The railway’s engineer, Eric Masters nicknamed them the ‘intercity set’ as they were so fast, and driving turns on them were limited to a few trusted drivers.

By the 1990s both of the cars were being used less and less and it was obvious that some major work would have to be undertaken on the underframes. It was decided that the cars were now surplus to requirements and they would be disposed of.  Car 8 was offered to the Southend Pier Museum, who accepted it for their collection. With no room in the small exhibition space it was displayed in an open position on the pier itself where it suffered from the elements. After a couple of years ownership of the car passed to Chelmsford City Council who moved it to secure storage in Sandford Mill. The eventual aim was to display the car in the newly redeveloped Chelmsford City Museum and in 2018 it was sent to Alan Keef who restored it in the original livery. It now lives in a large glass showcase in the grounds of the museum. (thanks to Dave Carson for permission to use his photograph)

Car 9 still survives but in a different location. It remained at the railway for several years and was subject of various attempts to restore it. Unfortunately the railway decided they needed the space so the Association found it a safe home at the proposed South Downs Heritage Centre in Hassocks. In the end the Volk’s contribution to the ‘heritage cente’ was not required but Car 9 stayed in safe store covered by heavy tarpaulin. The pictures below show Car 9 in the siding in the old north shed, being loaded at Brighton, and at Hassocks. For further news of the future of the car, which remains firmly in the ownership of the Association, please keep a watch on our news section.