Whilst planning for the 1901 extension to Black Rock Magnus estimated that he would need at least 7 cars to maintain the minimum level of service that was required. He already had 5 so he decided to go one better than the minimum and produce another 3.

Surprisingly enough he did not settle on 40 seaters as he had with Cars 3 & 4 but instead chose a similar but smaller design based around 32 seats. Although perceived wisdom was that all of these cars were built as semi-opens with side entrance sliding doors there is certainly evidence in the method of construction that Car 6 started life as a crossbench open. 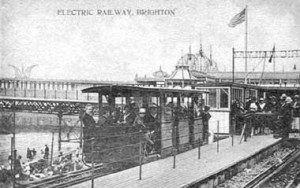 In the picture left one of the cars stands in the south siding at Palace Pier with a full load. Shorter than the other cars these three measured in at 18ft long. Car 6 had a width of 6’1″ and Cars 7 & 8 are 6ft. Cars 7 & 8 were the first to be designed with side entrance doors. Whereas Car 6 was built with open sides and three roof supporting posts each side Cars 7 & 8 had the centre post on each side replaced by a fixed glazed panel. Bulkheads fitted with three rectangular windows were fitted between the roof supporting pillars in line with the wheel centres and glazed sliding doors were fitted either side of the fixed central panels. The dashboards were of the simple kind fitted to Cars 1, 2 and 5 rather than the three panel variety on 3 & 4. All three cars entered service in 1901. 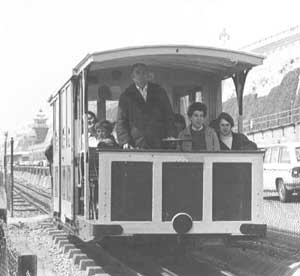 As he was unable to find any suitable British manufactured transmission units Magnus looked to Europe for a supplier. Belgium was at that time at the forefront of narrow gauge tramway manufacture and he was able to find what he wanted at the Compagnie Electrique Belge of Liege. During the great rebuilds of 1923 / 24 Magnus took the opportunity to increase the seating capacity of all three cars and to convert Car 6 to a semi-open in the style of 7 & 8. He enlarged the cars by the simple expediency of extending the floor and roof to give an overall length of 24’4″ – nominally the same as 3 & 4. This allowed two further bench seats to be fitted without the annoyance of having then against the dashboard. Two extra roof supporting posts were added on each side midway between the bulkheads and the dashboards and new 3 panel dash’s were fitted similar to those of Cars 3 & 4. Car 6 was converted by adding bulkheads and sides – the result can be seen to the right approaching Black Rock in the 1970s.

Backbone of the fleet

These three cars, together with Cars 3 & 4 were the backbone of the postwar fleet and it is a great tribute to Magnus Volk’s original design and engineering ability that they have lasted for a century and beyond. Following the postwar refurbishment Car 8 was renumbered as Car 5 to fill the gap left by the withdrawal of the Winter Car. Similarly Cars 9 & 10 were renumbered 2 & 1 respectively to fill the gap left by the destruction of the 1884 cars. This situation lasted until the year 2000 when the Association brokered a deal with the line’s owners to return the ‘misplaced’ cars to their original numbers.

The pictures show Car 7 at Halfway, 7 and 8 waiting in the West Loop, and Car 6 in the Pullman style livery applied when various liveries were being evaluated to replace the 1963 yellow and brown.

As part of the evaluation of new liveries Cars 7 and 8 received a red and cream livery similar to that eventually chosen for all the fleet. Cars 7 and 8 now run as a pair and will be repainted in the slightly darker red and cream when possible.

Car 6 and the Lottery

As part of the Lottery Grant won in 2016 Car 6 was one of three cars sent to Alan Keef for restoration/rebuilding. By the time it was taken out of service the roof was showing a dramatic amount of sag at the ends, but on returning to the railway after restoration it is once again in ex-works condition.