Entering service in 1892 Cars 3 & 4 were out-shopped from Paston Place Works as 40 seat crossbench opens. The only sign of any defence against the weather were a set of roll down canvas screens on the seaward side – a very strange state of affairs considering the all year round operation. 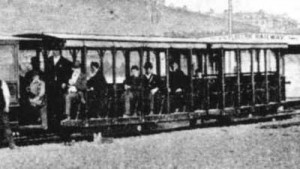 They were fitted with a radically new type of chassis built by Greenwood & Batley under licence from Magnus and his friend Anthony Reckenzaun. In this system a 7hp electric motor was connected to a worm gear differential on one axle. The phosphor-bronze worm wheel on the extended motor shaft meshed with a steel gear set midway along the axle. 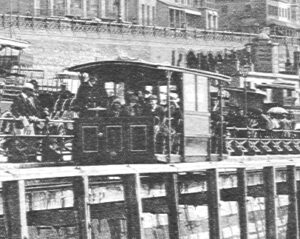 The onset of winter showed up the deficiency in the design and both cars were rebuilt to become semi-opens. A central saloon was added by the simple expediency of constructing two bulkeads between the second and fourth roof supports and adding sides similar to those of Cars 1 & 2. One bulkhead had a door with a window either side whilst the other bulkhead had three windows and no door. The reason for this was that the worm gear drive arrangement meant that the motor, gearbox and transmission shaft were above the level of the floor hidden under seats and a low transmission tunnel. Whilst it was possible to rearrange the seating over the axle without the gearbox to provide a doorway it would have been virtually impossible to do it over the axle with the gearbox. There is no record of the final seating plan but it must have reduced the capacity by as many as six seats. The picture right shows one of the cars in its rebuilt form sometime in the late 1890s. 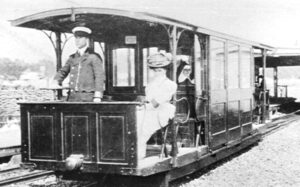 With the extension to Black Rock in 1901 Magnus decided to rebuilt Cars 3 & 4 in the style of his latest semi-opens. He also removed the temperamental Reckenzaun’s worm gear drive and replaced it with a 8hp motor which drove the axle directly from the armature shaft via a single reduction gear. This system, which he purchased from the Compagnie Electrique Belge of Liege proved very reliable and is still fitted today.

As far as the body was concerned Magnus removed the central roof support post and replaced it with a fixed glazed panel. The bulkhead door was sealed (the top hinges were still visible), and two glazed sliding doors were hung each side to give access to the saloon which was fitted with crossbench seating. 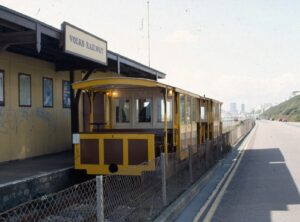 The other modification was to provide a glazed screen on either side of the bulkhead seating. This may well have been to protect the passengers riding in those seats from being struck by the sliding doors which slid back as far as the front edge of the bulkhead seat. And this is how the cars have remained to the present day – except for them being fitted with the standard Volk’s underframe in about 1923.


The lottery and Car 4

Car 3 was dismantled some time ago with a view to it being restored/rebuilt at Brighton. Unfortunately that project seems to have stalled with the construction of a new wooden chassis. However, thanks to the Lottery Grant Car 4 was sent to Alan Keef in 2017 for a full rebuild.  After being delivered back to Brighton in an ex-works condition it was fitted out with electrics and brakes with assistance from VERA members. One nice feature retained during the rebuild was the original bulkheads with the door and window configuration still visible.