Whilst the little 2ft gauge car was adequate for the original demonstration line the new 2′ 8½” gauge line was going to need something altogether more substantial. Two new cars were ordered – from whom is unknown – with the first being delivered in 1884 in time for the opening of the extended line. 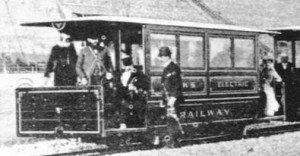 Although Magnus Volk’s original sketch showed a two-window design Car No.1 was delivered as a four windowed vehicle. The wider gauge meant that Magnus could build a greater capacity car so car width was now set at 5′ 6″, overall length at 20′ 8″ and height of 7′ 8½”. The enclosed saloon, which was just over 12′ in length and was accessed by doors set centrally in each bulkhead, seated 18 persons on two long bench seats. 12 others could be accommodated on the open platforms. 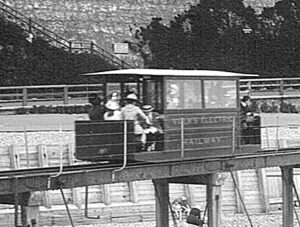 Car 2 was delivered in summer 1885 and was of similar dimensions but was fitted with the two-window option. Sometime before 1905 No.1 was modified to this design but other than that both cars remained very much as they were built for the rest of their working life.

Each of these cars was fitted with a Siemens D2, series wound 6hp electric motor driving one axle through a belt driven countershaft. Within this car there was a simple clutch operated epicyclic two-speed gear change for assistance with the gradients encountered when passing under the Chain Pier. Open stud controllers of the type used by the railway until the 1960s were fitted in the roof above the driving position, with reversing achieved by use of a detachable handle at each end of the car. Braking was effected by use of a tram type handwheel.

The cars weighed about 2 tons and were finished in polished mahogany. Some fairly ornate lining was applied to the sides and dashboards of the cars along with the words ‘Volk’s Electric Railway’ – possibly in gold. These cars provided sterling service between the opening of the line in 1884 and the wartime closure in 1940 when all of the cars were taken to the tramway depot at Lewes Road for storage. 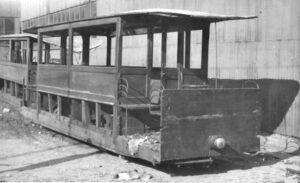 When this space was needed for something else – and with the threat of invasion no longer imminent – all of the cars were shipped back to the seafront and stored in an open compound under the arches along Madeira Drive. At the end of hostilities the cars returned to Lewes Road Depot for refurbishment but unfortunately Cars 1 & 2 were considered to be beyond economic restoration and these important pieces of history were scrapped in June 1948.