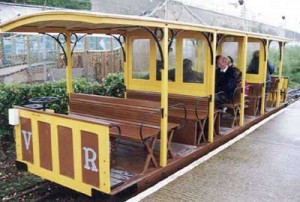 With his new car Magnus went one better as from the north side the car looked just like an ordinary open crossbench car but from the sea-side it looked like a semi-open with two sliding doors and a fixed centre panel. The reason for this was that it would give some solid protection from the chill wind off the sea but would also allow free movement of air around the car when the weather was fine – thus Magnus hoped to reap the benefit of both an open and a semi-open car on the same chassis. It also sports a four panel dash at the western end and a three panel dash at the eastern end. 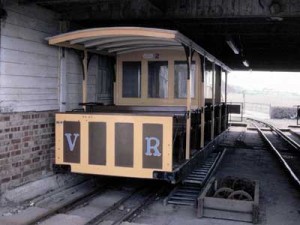 This strange hybrid system lasted until the car was fitted with the Volk’s standard chassis during 1923 / 24 Although the side panel and doors were removed during the rebuild the glazed bulkheads were left in place to give some protection. Car dimensions are: Overall length 24’6″, width 6ft and height 7’8″. An 8hp C.E.B motor supplies the traction.

One confusion with this Car results from the post-war renumbering when it became Car 2. This lasted from 1948 until 2000 when all of the cars reverted to their ‘as built’ numbers. By the 1990s the wheel profiles on this car had become extremely worn and it was sidelined as an emergency spare – but it did see some service as shown above where it waits its driver at Halfway.

In 2002 the decision was taken the rebuild and refurbish the car. Financial input from both the Council and the Association allowed the staff and volunteers to re-wheel the car, overhaul the underframe, renew the wiring and install new control gear. The car then had new canvas applied to the roof and underwent a complete repaint in a ‘Pullman’ style livery suggested by the Association. An ornate numbering scheme was applied to the centre dash panels and the build date was affixed to the central roof support on each side. The car re-entered service in 2003 in time for it to take the starring roll in the 120th Anniversary celebrations on Sunday 3rd August of that year

In 2016 it was decided to overhaul Car 9 and repaint it in the new ‘corporate’ livery. The side beams are a three piece sandwich, two wooden sections and a metal ‘flitch plate’. The latter was in need to replacement so this was also done. The new colour scheme was applied with most of this being undertaken by VERA members led by Ian Gledhill. The result is that Car 9 is now restored to ex-works condition and ready for service.