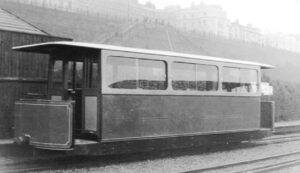 The second Car No.5 (the winter saloon)

Following his decision to scrap the original Car 5 Magnus set to and designed a car suitable for winter work. It was to have no outside seating and the saloon would be totally enclosed. As a further change from normal practice the body panels would be constructed of steel rather than wood. It was thought that the fabrication of the steel body, the steel dashboards, the wooden roof and the floor would be best contracted out, and so the work was undertaken by G.Kelsey, a Hove coachbuilder.

Although the body was constructed by an outside contractor the underframe was assembled by railway staff in a room set aside for the purpose in the ‘Bungalow’ station at Black Rock. When it was complete enough to move it was put on its wheels and towed to Paston Place Depot for finishing. The complete but unpainted body was delivered to Paston Place Depot by lorry and manhandled onto the completed chassis. The brakes and electrics were then assembled and the car was successfully tested. 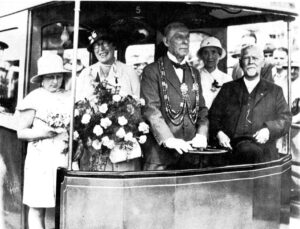 Entering service in 1930 Car 5 was used for the official opening ceremony of the new Aquarium Station on the 27th June of that year. Seating 24 the car was attractively painted in Royal Blue and Primrose Yellow. Internally the two longitudinal seats were covered in blue leather and three sliding windows were provided each side. Powered by a Siemens 8hp motor driving one axle via a countershaft the car was a useful asset to the fleet – especially during bad weather.

In 1940 Car 5 was transported to Lewes Road Depot for wartime storage. When space was required at the Depot the cars were taken to secure but open storage under the arches along Madeira Drive. By the time the war was over Car 5’s steel structure had suffered badly and when assessments were undertaken in 1947 it was considered too far gone to be economically repairable. It was scrapped sometime during 1948.