About three years after Cars 3 & 4 entered service Magnus must have decided that a further car was required to ensure the service was maintained. When it finally appeared in 1897 the new car, No.5 in the fleet, was very similar in design to Car 2.

Unfortunately no real records of dimension or construction have so far come to light but Barrie McFarlane did uncover a fairly basic end elevation drawing prepared by the Borough Engineer in 1898 which shows that the car had an overall width of 6ft. and measured 7’8½” from rail to top of roof. The major difference between this car and No.2 was that the window frames on each side of the saloon were detachable. This would allow their removal during periods of good weather. 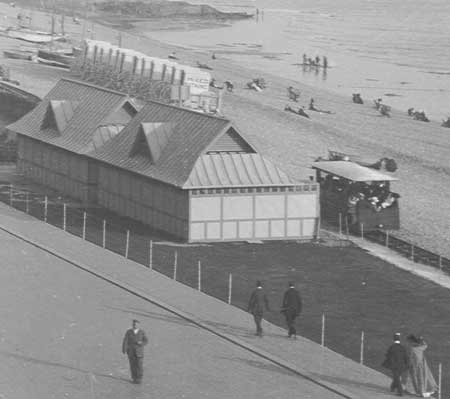 The picture shows Car 5 approaching the west loop en route for Paston Place. Close inspection of this picture – which is an enlargement from a postcard – shows that the glazing has been removed, at least on the north side of the car, allowing passengers to take the bracing sea air to full advantage.

The car was powered by a Siemens electric motor driving one axle via a countershaft. By the late 20s Magnus was faced with the choice of either rebuilding the car or scrapping it. He chose the latter and instead built a completely new No.5. The old body suffered the fate of many other transport related items and became a summerhouse in a garden near Falmer Station.