Car 1 on opening day. Built in 1883 this was the only car built for the original 2ft gauge line. 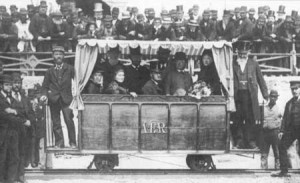 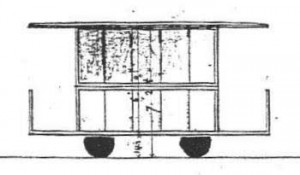 The car was constructed by William Pollard, a local Brighton coach builder. The car was quite lightly built with polished mahogany woodwork and a framework which supported a candy-striped awning. Two longitudinal leather covered seats were provided to seat 10 people. Small platforms were provided at each end of the car to allow access to the saloon and also provide a place for the driver to stand. Current was collected via the running rails so both wheels on one side had wooden centres to avoid a short circuit via the axles. The 50 volt supply was fed to the 1½ hp motor via a driver operated rheostat. Drive from the motor was transmitted to one axle via a reduction belt drive. The maximum speed was about 6mph.

The drawing shown right was found by Volk’s historian Barrie McFarlane and shows the modifications Volk was proposing to make to the car for all-weather operation.

Reports of the dimensions of the car vary. It would seem that it was about 11ft long overall and 4ft 6in wide. The centre saloon was about 7ft 6in long and the overall height was 7ft 2in. The wheelbase was 5ft and it had 12inch diameter wheels.