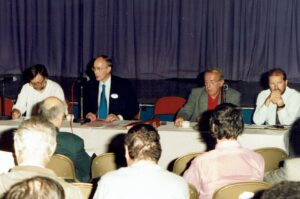 25 years ago, on 16th September 1995, a group of Volk’s Electric Railway enthusiasts gathered at the
Pavilion Theatre and formally established Volk’s Electric Railway Association, affectionately to be known as VERA. Its main aims, then as of now, are to assist and support the railway and to gather artefacts relating to the work of the pioneering electrical engineer, Magnus Volk.

The idea of a supporters group came from the Council and was particularly encouraged by the
Railway’s Manager, Stuart Strong. Now 25 years later, VERA has gone from strength to strength and so to has Stuart, who is still the Manager. Volunteers have been involved in a number of major projects, including the relaying of passing loops and the complete track layout at the new Heritage Lottery-funded sheds near Banjo Groyne. In normal times, various gangs of skilled volunteers can be seen at work, in all weathers, fulfilling the original aims of the Association.

VERA became a Registered Charity in December 2019. Chairman, Peter Williams, said ‘It is a proud moment for VERA to be celebrating a milestone anniversary and we are pleased to have nurtured a strong relationship with Brighton & Hove City Council over many years. As a Charity, we have now a stronger base on which to build for the next 25 years and have some exciting plans in the development stage’.

The COVID-19 crisis has postponed the planned celebrations for this year but it is hoped that the situation will have improved sufficiently to enable these to go ahead in 2021.