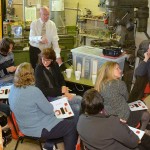 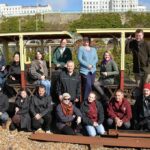 Heritage Learning Brighton & Hove joins together heritage organisations across the city to offer schools a comprehensive choice of experiences for their pupils.  A Teachers Focus Group has been established representing 6 primary schools and on Wednesday 18th March they spent the day at Volk’s Electric Railway, together with representatives from Brighton Pavilion and Brighton Toy & Model Museum.  Their purpose was to find out more about the life and legacy of Magnus Volk, who had been put forward as a potential Flagship project for 2014.

The Focus Group were treated to an illustrated talk by VERA’s Vice Chairman, Peter Williams and a surprise ride on Car 9, the first to carry passengers in 2014.  A stop was made at Halfway Station for a group photograph, which included the new seasonal staff, who are now in training.

We are pleased that the Focus Group have confirmed their intention to promote Magnus Volk to the schools; the next few months will be spent preparing the study material.

Photographs were taken and kindly provided by Tony Mould.