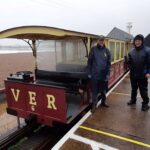 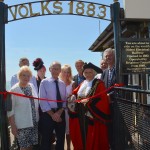 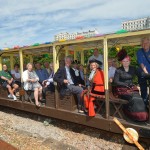 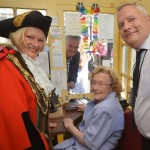 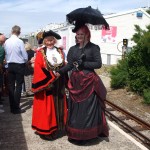 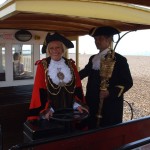 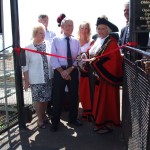 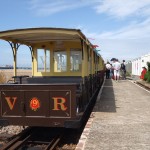 Sunday, 4th August 2013, marked the 130th birthday of Volk’s Electric Railway, another milestone for the world’s oldest operating electric railway. To celebrate the occasion, a ribbon-cutting ceremony was held at 12 noon, the exact time at which Magnus Volk set off in his little electric railway car along 400 metres of narrow-gauge track laid directly on to the beach opposite the Aquarium.

The cutting of the ribbon was carried out by the Mayoress of Brighton, Councillor Denise Cobb and the ceremony was hosted by TV presenter and journalist Nicholas Owen, who is an active member of Volk’s Electric Railway Association (VERA) and volunteer driver of the venerable electric railway cars. Brighton & Hove City Council and VERA jointly invited a number of guests, including local Councillors, MP’s and Bernard and Margaret Volk. Bernard Volk is Magnus’s grandson and the current President of VERA.

Seasonal driver, Michelle Artemis, added an historical touch by appearing in a re-creation of a Victorian ladies’ promenading dress, complete with parasol.

VERA members took over the running of the railway for a short time later in the day, as part of its ‘late running’ events. Cars departed every 15minutes until 7.00pm, enabling visitors to take in the evening sunshine along the route.

The railway has undergone many changes over 130 years and will see many more in the future. Having just received an Engineering Heritage Award, there is every reason to hope that this priceless national treasure will receive the investment it so richly deserves.